Mick Mercer "Music To Die For" 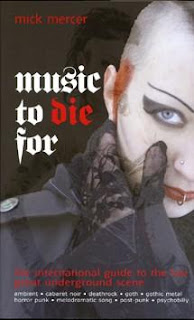 Da página do my space do autor:

My fifth book concerning Goth has now arrived and is out now.

MUSIC TO DIE FOR is 624 pages long, containing individual entries on 3,581 different bands, from 70 countries, with 183 photos. It covers bands from the beginning of these scenes to the present day and, wherever possible, contains full line-up details and discographies as well as unusual facts revealed by many of the bands. This is the biggest guide ever printed about the underground scenes in which Goth, Post-Punk and all things noir co-exist with equal splendour.

I have written more about Goth than anyone else in the world, I should imagine, and my previous four books were Gothic Rock Black Book, Gothic Rock, Hex Files and 21st Century Goth. (All of these will be self-published as Author’s Editions later this year, which means a great many more pages will be added.)

Enviar a mensagem por emailBlogThis!Partilhar no TwitterPartilhar no FacebookPartilhar no Pinterest
Labels: Mick Mercer, Music To Die For